By admin on May 27, 2010 in environmental problems, water conservation

Water hyacinth, Eichhornia crassipes, is widely recognized as one of the world’s worst weeds. The plant is a native of the Amazon, but tolerates a wide range of climatic and aquatic conditions, allowing world-wide infestation across a range of latitudes and climates. In South Africa the weed was first recorded on the Cape Flats in 1908, and was introduced into KwaZulu Natal at about the same time; since then it has spread throughout the country. 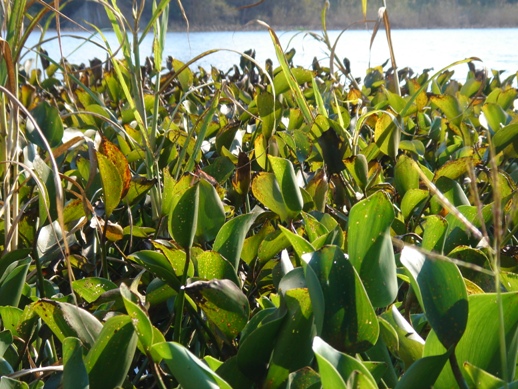 This most damaging water weed blocks waterways, affecting both navigation and drainage, and increases siltation and flooding. Water hyacinth has a high rate of evapotranspiration leading to water loss from dams; and it displaces indigenous flora and fauna by modifying the habitat. It is also a health hazard as it provides suitable breeding sites for vectors of animal and human diseases – this leads to an increase in cases of encephalitis, schistosomiasis (bilharzia), filariasis (caused by a parasitic nematode worm), river blindness and possibly cholera.

Water hyacinth is a declared weed that must be controlled in terms of legislation. Complete eradication is nearly impossible as the cost will be prohibitive; the aim of control is thus to reduce infestations to acceptable levels of about 10% cover rather than trying to eradicate it completely. Re-infestation occurs easily from seed banks or from vegetative growth, which means that control is a continuous exercise. 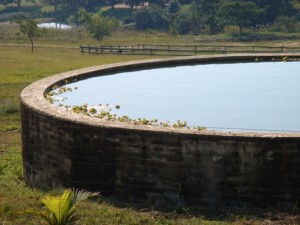 Controlling techniques include physical removal, application of herbicides, releasing biological control agents, and harvesting for commercial or subsistence purposes. Water hyacinth can be used for fodder, as a fertilizer, as a fibre source and for making paper, or for removing mineral nutrients from polluted water. However the potential benefits of these uses is far outweighed by the negative costs of water hyacinth to communities – thus far none of these commercial uses have proved sustainable over the medium to longer term. Physical removal has been widely used all over the world, but it is ineffective for large infestations, and seems to work only in small confined areas like ponds. Mechanical harvesters were developed in some parts of the world, but with dubious success and most have been abandoned as being too expensive and ineffective. Chemical control has been practiced since the early 1900’s; formulations of 2,4-D and Glyphosate are aerially sprayed, and are often used because of the immediate impact it has on the weed. However, both physical and chemical methods are costly and unsustainable in the long term, and biological control is now accepted to be the most cost-effective and environmentally friendly technique for the control of water hyacinth.

Biological control uses natural enemies (insects, spiders and pathogens) from the region of origin; use of these agents has resulted in dramatic successes in many parts of Africa and the world. In South Africa a biological control programme was initiated in 1973, but terminated in 1975, and then resumed in 1985. Presently control of water hyacinth in South Africa relies on six established agents. 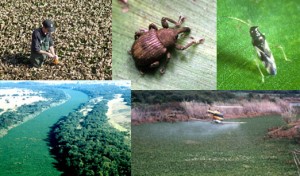 The agents presently used include two weevil species, a pyralid moth, a galumnid mite, the water hyacinth bug and a fungal pathogen. An additional three insect species are presently under investigation.

Although biological control has been effective in certain areas in South Africa, it has not been as successful as in some other parts of the world. The main problem is that in waters enriched with nitrates and phosphates water hyacinth tends to outgrow the biological control agents. In areas where additional mechanical or chemical clearing takes place, the regular removal of water hyacinth also results in the removal of the biological agents. Low winter temperatures have a further negative impact as this kills off large numbers of the insect species used as control agents. In fact low water temperatures and frost are the major limiting factors in the successful use of biological agents. In most parts of the world biological control is successful only in areas with tropical or subtropical climatic conditions.

In our coastal regions where frost and low temperatures is not a major factor, biological control could be much more successful, but this will only be the case if the levels of nitrates and phosphates entering our river systems are reduced. This means that sources of pollution and enrichment of the water has to be managed and eliminated where possible. 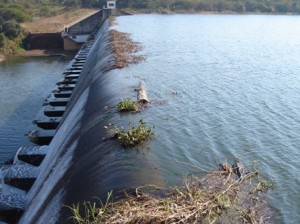 Surprisingly, Water Hyacinth is still used as an ornamental pond plant in some parts of the world .  This is how seemingly benign exotic species become problem invasive plants.  Lantana camara is another example of a plant that has become an aggressive alien invasive in much of the Lowveld around White Riverand Nelspruit.  Water Hyacinth can even take hold in open reservoirs and water tanks if given a chance.  This plant is a problem in many water storage facilities and is very difficult to eradicate once established.  Primkop Dam near Nelspruit had almost 80% coverage by water hyacinth at one stage; now, through chemical control, it has been reduced to small patches.  This would be the ideal time for the introduction of biological control agents as part of an integrated management plan.  Eutrophication of river systems in Mpumalanga is a result of agricultural fertilizer run0ff, sewerage and grey water introduction.  Large quantities of greywater could be prevented from entering our water storage dams by the practice of grey water recycling.  Gray water recycling systems and rainwater harvesting systems reduce the amount of phosphate- and nitrate rich water entering the stormwater drains and sewage plants (which all ultimately end up in our watercourses).  Water Rhapsody water systems are eco-friendly and save you time and money.

How to Choose a Water Tank
Water Quality Testing