Does your drinking water smell foul, or are you worried that chemicals might be damaging your family’s health? Water treatment facilities currently use chlorine that produces carcinogenic by-products to keep your tap water clean, but Tel Aviv University scientists have determined that ultra-violet (UV) light might be a better solution. 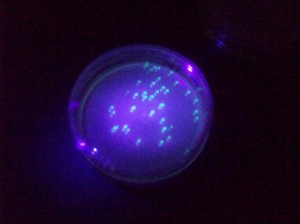 “UV light irradiation is being increasingly applied as a primary process for water disinfection,” says Lakretz. “In our recent study, we’ve shown how this treatment can be optimized to kill free-swimming bacteria in the water — the kinds that also stick inside water distribution pipes and clog filters in desalination plants by producing bacterial biofilms.”

This undesired “stickiness” of bacteria to surfaces is called “bio-fouling,” which costs taxpayers and governments billions of dollars each year. “No one should be drinking microorganisms in their water. In addition, when microorganisms get stuck in the pores of the membranes of filters, they create serious problems,” says Lakretz.

Not all UV light is created equal

Irradiation could be used as a pre-treatment to inactivate suspended microorganisms in water, with the secondary goal of preventing bio-fouling. In their study, reported in the journal Biofouling, the researchers looked at targeted UV light wavelengths on the bacteria Pseudomonas aeruginosa, commonly found in drinking water.

The TAU researchers investigated UV wavelengths within between the 220-280 nanometre (nm) scale, and found that any wavelength between 254 and 270 nm effectively cleaned the water. Those in the same region were also best for keeping membranes clear of bacterial build-up in desalination plants, they reported. Special lamps that emit a multi-wavelength UV spectrum ― more advanced than the single-wavelength UV lamps found in home water systems ― were used.

The UV “zap” also prevented bacterial re-growth in the water after UV inactivation. “The best way to control and kill these micro-organisms was to damage their DNA,” says Lakretz. “The damage that the UV light causes has no known negative effect on the water,” she adds.

In addition, the prevention of biofilm formation by bacteria was UV dose-dependent. The researchers reported less bio-fouling when a bigger dose of UV light was applied to the water around the film.

A light to save lives 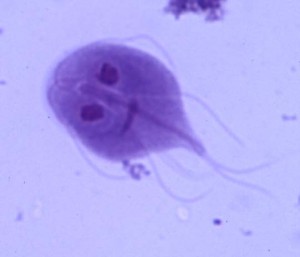 affected by chlorine treatment, such as Giardia and Cryptosporidium, two harmful parasites that cause severe diarrhea and can lead to death. Children, the elderly and those in developing nations are particularly vulnerable. “Sewage leakage into water supplies poses a big problem in terms of bacterial contamination, and is something UV light could remediate,” says Lakretz.

Small amounts of chlorine or other oxidants will still be necessary to make sure that residual bacteria don’t enter the water further along the distribution pipeline. But Lakretz says this new approach to disinfecting water while controlling biofouling can also reduce the amount of carcinogenic by-products that chlorine produces.

Technology that can reduce the amount of chlorine and other chemicals that municipalities add to water is good.  There are so many known and suspected carcinogens in our everyday lives, it’s no wonder that cancer is so prevalent in modern societies.  Some microorganisms such as Giardia spp. are very difficult to kill with ordinary doses of water treatment chemicals; UV light ensures these are killed.  Our drinking water is often contaminated by sewage because the plants are over-burdened.  You can reduce the burden on sewage treatments plants by recycling grey water.  Water Rhapsody supplies and installs effective greywater recycling systems that reduce your household water consumption.  See the grey water faq for more information.