Scientists are reporting evidence that certain ingredients in shampoo, detergents and other household cleaning agents may be a source of precursor materials for formation of a suspected cancer-causing contaminant in water supplies that receive water from sewage treatment plants. The study sheds new light on possible environmental sources of this poorly understood water contaminant, called NDMA, which is of ongoing concern to health officials.

Their study is in ACS’ Environmental Science & Technology.

William Mitch and colleagues note that scientists have known that NDMA and other nitrosamines can form in small amounts during the disinfection of waste-water and water with chloramine. Although nitrosamines are found in a wide variety of sources — including processed meats and tobacco smoke — scientists know little about their precursors in water. Past studies with cosmetics have found that substances called quaternary amines, which are also ingredients in household cleaning agents, may play a role in the formation of nitrosamines.

Their laboratory research showed that when mixed with chloramine, some household cleaning products — including shampoo, dishwashing detergent and laundry detergent — formed NDMA. The report notes that sewage treatment plants may remove some of quaternary amines that form NDMA. However, quaternary amines are used in such large quantities that some still may persist and have a potentially harmful effect in the effluents from sewage treatment plants. 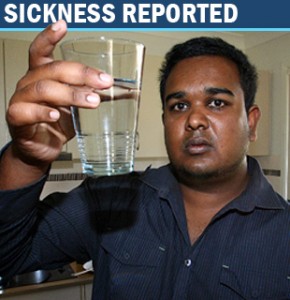 CASES of nausea and diarrhoea have been reported at Coomera following revelations recycled sewage was pumped into residents’ drinking water.

The Weekend Bulletin revealed the new $80 million Pimpama Wastewater Treatment Plant had been pumping recycled sewage into the wrong pipes to more than 630 homes since Tuesday.

The problem was picked up on Friday after a resident complained about the water quality.

The plant supplies ‘Class A-plus recycled water’ which can be used for car washing, gardening, flushing toilets and external household cleaning. It is not suitable for drinking, cooking or cleaning, personal washing, clothes washing, swimming pools or spas, or pets and livestock.

Residents around Orlando Drive and Hudson Court appear to be the worst affected, with some reporting a ‘foul odour’ when they turned on their household taps.

It seems that many times what we think is safe today is proven harmful tomorrow.  Recycling sewage water for drinking is becoming more prevalent as a way of conserving water.  These complex recycling systems are great if they are properly operated and maintained.  To trust such a system in a third world country would probably be risky.  Hopefully these hi-tech sewage plants can filter-out NDMA.  Alternatively, we should switch to true eco-friendly cleaning agents.  An earlier post mentions the use of environmentally friendly detergents for washing machines.  Grey water recycling systems would ensure that NDMA doesn’t enter sewage treatment plants.  To be 100% sure of what you are drinking, ideally you should be water self sufficient.  One way of achieving water independence is by collecting rainwater and storing it rainwater tanks (in some areas and situations, total water self sufficiency can be achieved this way).  Rainwater harvesting systems should always include a good filtration system if you intend drinking rain water harvested from your roof.  Water Rhapsody Mpumalanga supplies and installs gray water systems and rainwater harvesting systems.  Contact us for a quote or more information.